T3 is supported by its audience. When you purchase through links on our site, we may earn an affiliate commission. Learn more 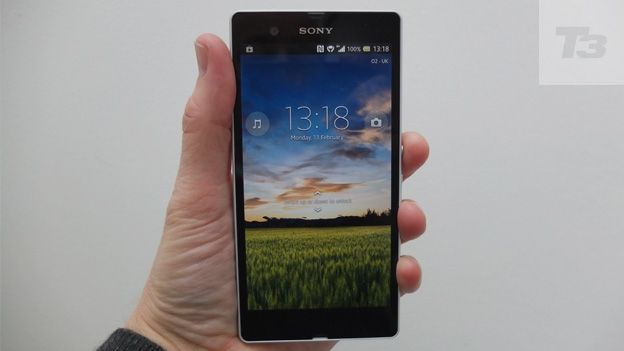 It's certainly a good-looking phone that's jam-packed with features but is this the best phone the company has ever made? Here's our Sony Xperia Z review

What makes a good smartphone? It's more than just ticking all the boxes where specs are concerned. It's not just a couple of striking innovations.

Sony's latest is its biggest push yet to join the ranks of top-tier smartphones like the iPhone 5, LG Nexus 4 and Samsung Galaxy S4. It's also the biggest phone the company has made. So how does it stack up?

Well, despite the 5-inch display, this isn't the hand-stretching experience you might expect. It ain't petite, but the thickness makes it reasonably comfy even if you don't have giant hands. The edges are sharp so this is not a phone, like the Galaxy S4 which you can roll through your fingers like a worry stone because of its smooth, curved edges.

It's helped by the fact that the excellent build quality makes it feel good in the hand – shatterproof glass front and back, plastic edging and a solid finish. The dimensions are not small, however, at 139 x 71 x 7.9 mm, and it's bigger than the Samsung Galaxy S4 in height and width, matching its depth. It's also 16g heavier than the S4.

The power button, used to wake the screen from sleep, is two thirds up the right-hand side and unlike some phones where you have to fumble to find it, this one is unmissable, especially on the black and purple versions where it stands out particularly. It's a metal circle, carefully detailed with a milled finish that looks good.

This level of precision and subtle marking epitomises the phone. It's a satisfying experience handling the handset (and that's before we've even turned it on).

There are hardly any other buttons, in fact limited to the volume rocker which sits on the right edge below the power button. There's no home button, no camera shutter – it's a very minimalist effect save for a pair of metallic contacts which are used when the phone is placed in its charging dock. It's the only design disappointment in the Xperia Z.

The lack of other buttons and markings is down to the phone being waterproof – the headphone socket, charging point and sim card and microSD card slots are all hidden under flaps which give a streamlined appearance to the phone.

Sony has made sure all the features you'd expect in a high-end smartphone are there. NFC? Check. Quad-core chip? Check. Decent camera? Double-check. And 4G connectivity? Check – in fact it comes with all the frequencies of LTE that the UK will have, so all networks will be happy.

One more thing: as mentioned above, it's waterproof, so you can retrieve it from the toilet bowl (maybe rinse it afterwards, mind) or bath. Texting in the shower is now a possibility, though, seriously? Must you? Note that the price you pay is that there are fiddly flaps to keep water out of the earphone socket and so on.

Sony says the phone can sit in water to a depth of 1 metre for up to 30 minutes without problems, so don't just leave it in the bath overnight. And anyway, you should let the water run away when you get out of the bath.

The camera is great: the 13MP resolution is higher than most rivals can muster and has lots of features including Sweep Panorama – a Sony camera speciality with a simple sweeping movement that came along before the similar iPhone feature.

There's also Smile Shutter which recognises when your subject is smiling and takes the shot without you even having to touch the screen. It's reasonably fast and even works well in lower light situations – usually a cameraphone's Achilles' heel.

Were this a Windows Phone handset, a physical camera button would be mandatory and would work even when the phone was in standby – a fine way of activating the snapper when you're in a hurry for a celeb spot. But there's no button here, though a shortcut on the lock screen at least makes it almost as quick. And you can even set the camera to automatically take a shot on launch, which may be handy.

The focus, by tapping on the screen where you want it to look sharpest, as on the iPhone, is simple enough and unlike many phone cameras, Sony has built a lot of intelligence in. The Superior Auto mode, especially, is good at reading the situation and adjusting exposure accordingly.

Beyond that there are lots of effects and settings such as smile detection so the camera shoots when your subject smiles with no help from you, or panorama and burst modes. Panorama shots are something Sony cameras have made a feature of for some time now and that expertise is evident here, too.

HDR (high dynamic range, where a series of shots are taken in quick succession and combined to create the best, most dramatic result) is in evidence here, and certainly improves images.

For all these features, though, the shots are not as glorious as the HTC One with its fewer, bigger pixels that can drag in light more accurately.

Video is a different matter, with strong, impressive results – high quality footage and excellent stabilisation when you're shakier than you should be. You can shoot at full HD resolution at 30 frames per second and the video is good enough to be proud of. Though remember that the files are big and may be difficult to share.

The shots you take, or the video you film, looks great on the Xperia Z's 5in screen. Actually, anything looks pretty good on this screen because it has an exceptionally high-resolution (1080 x 1920, so Full HD – as many pixels as on a full HD flatscreen TV). This gives the screen a resolution of about 441ppi, against 324ppi on the already pretty impressive iPhone 5 screen.

The Galaxy S4 matches this and the HTC One is the only phone to beat it, with its remarkable 469ppi resolution, achieved because it has the same number of pixels in its smaller, 4.7in screen.

And it uses Sony technology from the company's TV department to make those plentiful pixels gleam, in what's called the Sony Mobile Bravia Engine 2. Whatever the black magic it works, the results are highly impressive: rich, detailed, colourful without being over-saturated and butter-smooth for video playback.

This level of detail works well for everything, making type on web pages or ebooks looks superbly sharp and video very enjoyable. Games are similarly sumptuous and vivid with fast, smooth frame rates.

That 1.5GHz processor is a Qualcomm MDM9215M quad-core Krait model so is, as you'd expect, very swift indeed. As more demanding apps arrive it should have more than enough slack to keep things ticking along happily enough.

For now, it's lightning-fast even with multiple apps running. The truth is that few phones actually need processors quite this fast just yet but it's good to have more than enough power than not enough, right?

The phone comes with Android Jelly Bean but not the very latest version, though an upgrade is planned. There's not much difference between the versions here – 4.1.2 and the latest 4.2. They're both called Jelly Bean, after all. Still, many users will be delighted to upgrade to the latest edition when they can.

It's not hugely customised – though Sony's icons are slicker than plain Google ones – and there are extra Sony apps like Video Unlimited, Music Unlimited and Track ID to name that tune. And there's all of Google Play at your disposal, too.

NFC is one of those technologies that still has to find its killer usage. Sure, it's great to be able to pay for your coffee with one tap, though the current scares about people grabbing data from touch-enabled credit cards hasn't made this technology more popular.

But Sony is doing more than most manufacturers to make it relevant, thanks to its Smart Tags. These are little doohickeys which let you assign multiple actions to different situations. So it can set an alarm, switch off wi-fi, launch hands-free mode and much more.

Whatever you set it to do. It's especially useful in the bedroom where plonking it down turns it into a night-lit alarm, say, without you doing a thing. Sony is definitely at the forefront of this – expect other manufacturers to catch up.

A big and detailed screen like this is bound to be demanding on the battery, so no wonder it's a sealed unit so every cubic millimetre of cell can be utilised. Even so, the battery life is not exceptional. It's not bad, either, but you'll need nightly recharges. However, there is an option to boost the battery life.

Battery Stamina mode extends the life considerably. A screen in the program reveals how long your phone will keep going on its current charge (a handy innovation in itself). Turn on Battery Stamina and watch the numbers jump. It only calculates standby time, but for example an 8-hour estimate leapt to 2 days 17 hours with Stamina invoked.

It achieves this by shutting down almost everything, to be honest, so you won't have a fully functioning mobile. You can still receive texts and phone calls but wireless and mobile data are disabled while the stamina mode is invoked.

It's not a bad deal and alarms will still sound. And it definitely does save power so you can use your phone for longer.

In practice the estimates weren't wholly reliable, but it's great to be able to eke out what juice there is when you know you otherwise be able to charge the phone in time.

Call quality is good, not least thanks to the second microphone which works to deduct excess noise so your caller can hear you more clearly, and signal strength was consistently good. Data speeds, especially on 4G LTE were impessive – though bear in mind that when everyone's on 4G, things may slow down.

The Sony Xperia Z is a pretty spectacular phone. It has an amazing display, a strong camera and that pub-pleasing extra that your phone is waterproof, even if it does mean you have to work to get at the headphone socket.

It may be too big for some hands but is manageable by most – don't let the measurements put you off. Battery life is okay, but improved with Stamina mode. Above all, it looks just great – easily the classiest Sony mobile yet, and an equal with the best Android phones out there.

The more recently released Samsung Galaxy S4 has other features and a slimmer design with an arguably even better screen, as does the HTC One. And iPhone users will still love their operating system's exceptional ease of use, which no Android phone matches. Still, this is a highly appealing and enjoyable to use handset.